Thailand, as one of the world’s most popular tourist destinations, is home to truly breathtaking natural beauty. White sand beaches fringed with palm trees, tropical forests, mist-covered mountains and compelling national parks and waterfalls. Here are some of the most beautiful places to add to your Thailand Bucket List.

The Me Ko Ang Thong Marine Park is about 60km off Koh Samui and consists of 42 islands, all but one uninhabited, that jut out of the azure blue waters of the Gulf of Thailand. The park was established in November 1980 as Thailand’s 21st National Park with the express purpose of protecting this 102 square kilometre archipelago. Covered with tropical forests and formed from limestone that reach up to 400m above sea level, they have descriptive names such as ‘Sleeping Cow Island’ and ‘Three Pillars Island’, which adds to the character. The word Ang Thong translates to golden bowl. Some of the scenery may look familiar as part of the movie The Beach, starring Leonardo DiCaprio, was filmed here.

The azure blue water around the Mu Ko Ang Thong islands is shallow and makes for easy swimming. On land, the park supports several types of vegetarian, including the lesser-known Ang Thong Lady’s Slipper Orchid, an endemic species. Wildlife found here includes 16 species of mammals, more than 50 bird types and 19 species of reptiles and frogs. Look out for the elusive Dusky Leaf Monkey with its white eyes set in a black face, which you might be lucky enough to see in the trees as you explore the island. 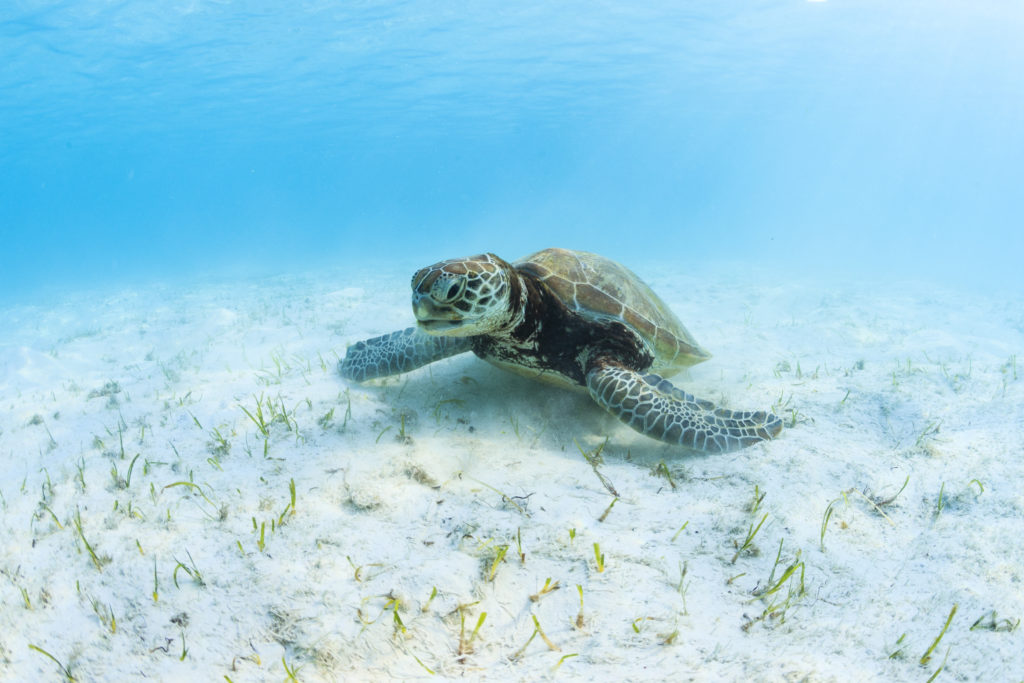 Since its establishment in 1981, Ao Phang Nga National Park, which is home to the largest remaining primary mangrove forests in the country, has been protected. The bay is crisscrossed with shallow tidal channels and peppered with towering limestone karsts – the most famous of these being Khao Phing Kan, better known as James Bond Island due to it being featured in The Man with the Golden Gun 007 film. Within the shallow marine waters and forested wetlands of Ao Phang National Park are over 28 species of mangrove. These consist of coral reefs and seagrass beds with 88 species of birds, 82 fish, three amphibians, 18 reptiles and 17 mammals. Also occurring here are the black finless porpoise, the white-hand gibbon and the dugong. Many of these species are endangered or globally threatened. Phang Nga, just 75 kilometres northeast of Phuket, is iconic Thai natural beauty. 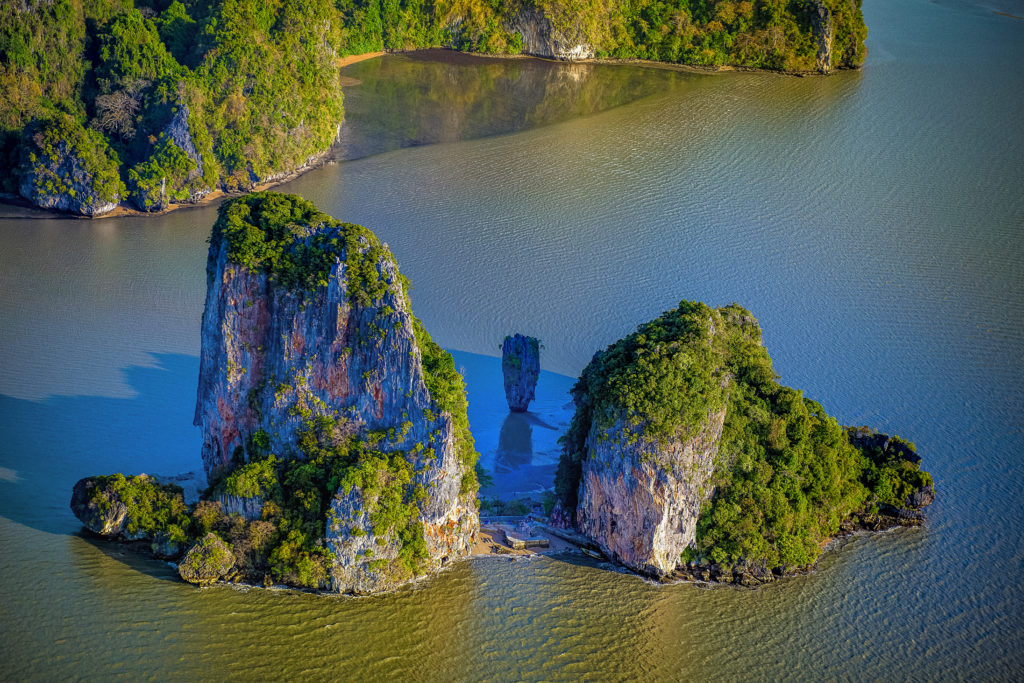 Thailand is home to many waterfalls but the one in Erawan National Park near Kanchanaburi impress the most. Situated within the Ewaran National Park, the waterfall oasis comprises a group of seven waterfalls with a drop from the top waterfall to the bottom one over 1500m, each with its distinct character. The water plunges over limestone cliffs and into beautiful plunge pools, which has led to the landscape being sculpted by the water. It is truly beautiful. To view the cascading and pooling water from above you will need to take a 2km hike, but the view is more than worth it. There are hiking trails, caves and emerald coloured plunge pools to explore and enjoy along the way. One of the most famous parks in all of Thailand, the deciduous forest makes up 80% of the park, the remainder is covered in evergreens. The spectacular waterfalls that flow into each other and the heavily wooded land create a fairy tale haven for nature lovers. 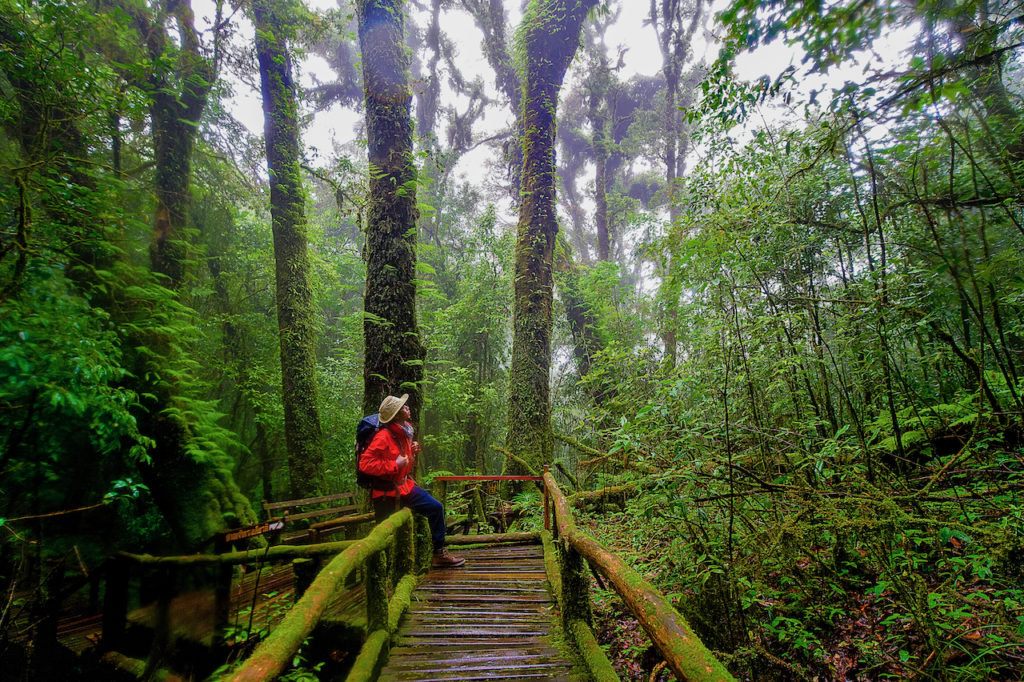 Doi Inthanon, approximately 60 kilometres from Chiang Mai, is one of the most popular National Parks in Thailand, renowned for its hiking trails, waterfalls, remote villages and viewpoints, as well as cool-climate given the altitude. Known as ‘The Roof of Thailand, Doi Inthanon covers an area of almost five hundred km². As part of the Himalayan mountain range, the elevation is between 800 and 2565 meters and includes the highest peak at Doi Inthanon, which is also the highest mountain in Thailand. The vegetation is predominantly evergreen cloud forests, sphagnum bog on the elevations, pine and mixed deciduous teak. Established in 1972, it was named in honour of King Inthawichayanon, one of the last kings of Chiang Mai, who was concerned about the forests in the north of Thailand and wanted to preserve them. After his death, his remains were placed in the park as he had ordered and the forest was renamed Doi Inthanon. 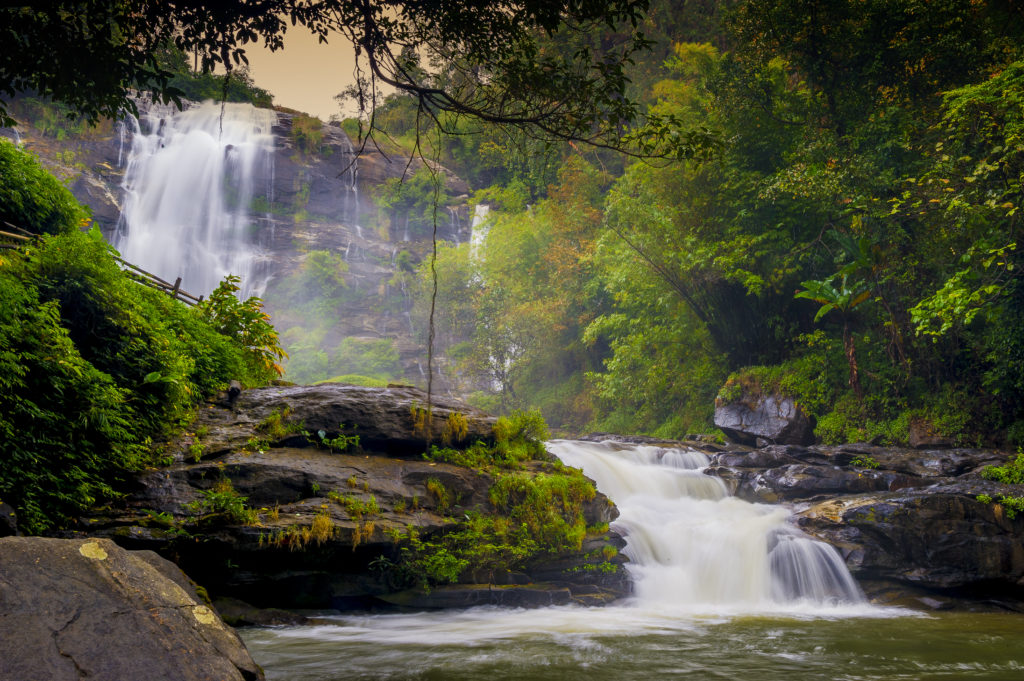 The Similans are a group of nine islands belonging to the Marine National Park, about 84 km northwest of Phuket. Completely undeveloped, they offer visitors an unspoiled and unchanged landscape.  Similan is the undisputed top scuba diving site in Thailand and is regularly ranked among the top 10 dive sites in the world. The Similans can be visited on day trips as well as short stopovers. The ranger’s camp has basic accommodation in tents and small bungalows that allow visitors to fully immerse themselves in the natural beauty of the islands. With desolate beaches, lush vegetation, crystal waters, and the only sound being the wind through the trees, the Similans offer the ultimate getaway destination.

If you’re looking for a break from the busy city life to reconnect with nature, the Khao Sok National Park in Southern Thailand is one of the best places for this. Home to one of the oldest rainforests in the world and the largest preserved environment in Thailand, this destination offers excellent adventures which are best enjoyed on an extended stay. You may come across wild elephants and rare species such as the giant parasitic Rafflesia flower, hornbill birds, gibbons and even tigers. Enjoy trekking into the jungle or take to exploring the waters by canoe. The Khao Sok National Park is located on the mainland, surrounded by the ever-popular Phuket, Khao Lak, Krabi, and Koh Samui. On your visit make sure you pack plenty of sunscreen and comfortable clothing.