Thailand’s third-largest island after Phuket and Samui, Koh Chang is fondly known as ‘Elephant Island’ because of its mammoth size and elephant-shaped headland. Forming part of the Mu Koh Chang National Park, it is located in the Gulf of Thailand around 300 kilometres east of Bangkok in the province of Trat. Known for its dense, steep jungles and hiking trails with impressive waterfalls, as well as offshore coral reefs and a shoreline that is dotted with beaches and villages, it’s easy to see why Koh Chang is consistently popular with tourists.

Adding to the beauty, 70% of the landmass is covered in natural rain forest, meaning that the island is not densely populated but rather only has about 5000 permanent residents, giving it an authentic and relaxed sense of Thai living. A wide range of wildlife can be spotted here, including a variety of birds, deer and several wild elephants that all call Koh Chang home. The surrounding waters provide excellent snorkelling with countless diving opportunities. 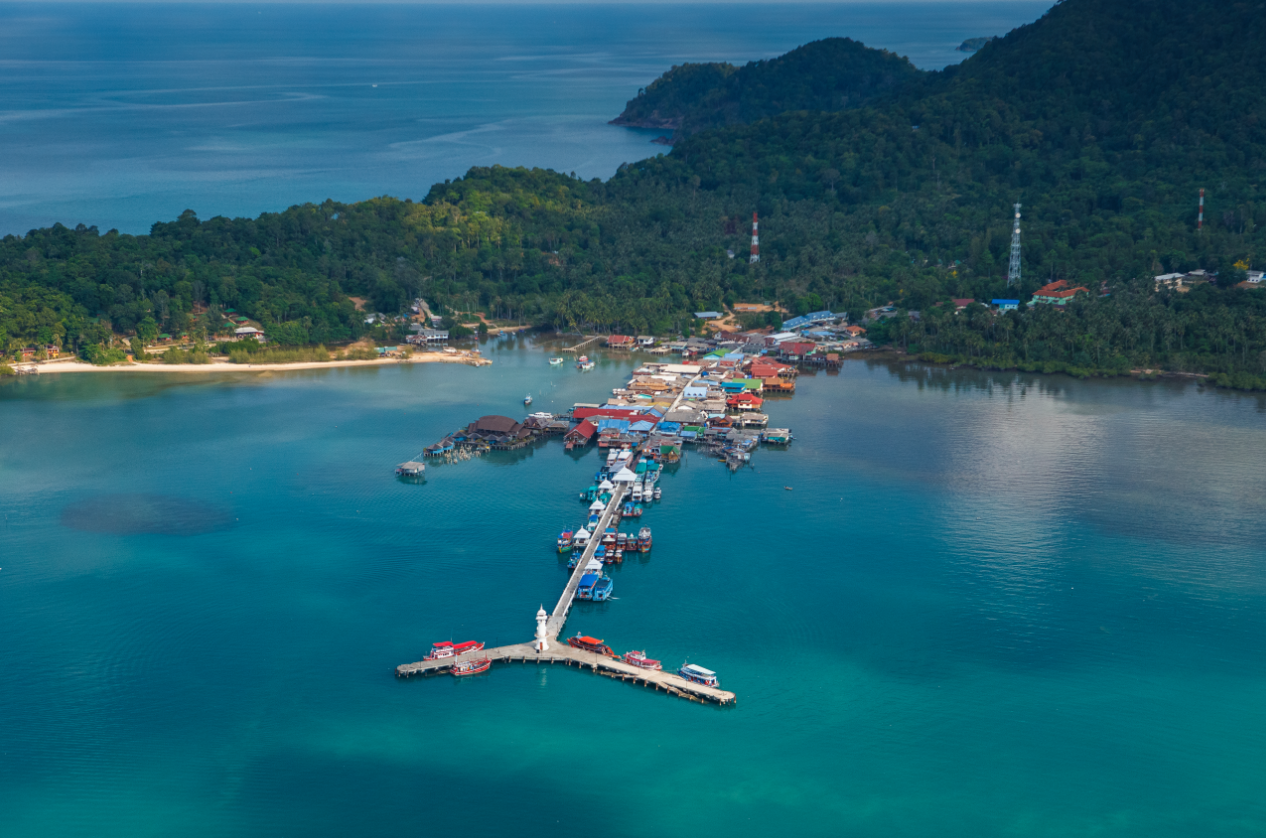 The History of the Island

Before World War II, Koh Chang was little known to Westerners and barely populated. The few resident families there made a living growing fruit and coconuts. In January 1941 during the Franco-Thai War, the Thai Navy fought against a French attack in the waters south of Koh Chang. It was years later in the mid-1970s that the first free-spirited tourists started arriving to the island on local fishing boats. By 1982, Koh Chang became part of the Mu Koh Chang National Marine Park. It is only in the past decade that Koh Chang has turned into a major tourist destination, both for foreigners and local Thais. This has brought a large amount of development aimed at providing visitors with all that they could hope for on their South-East Asian holiday. 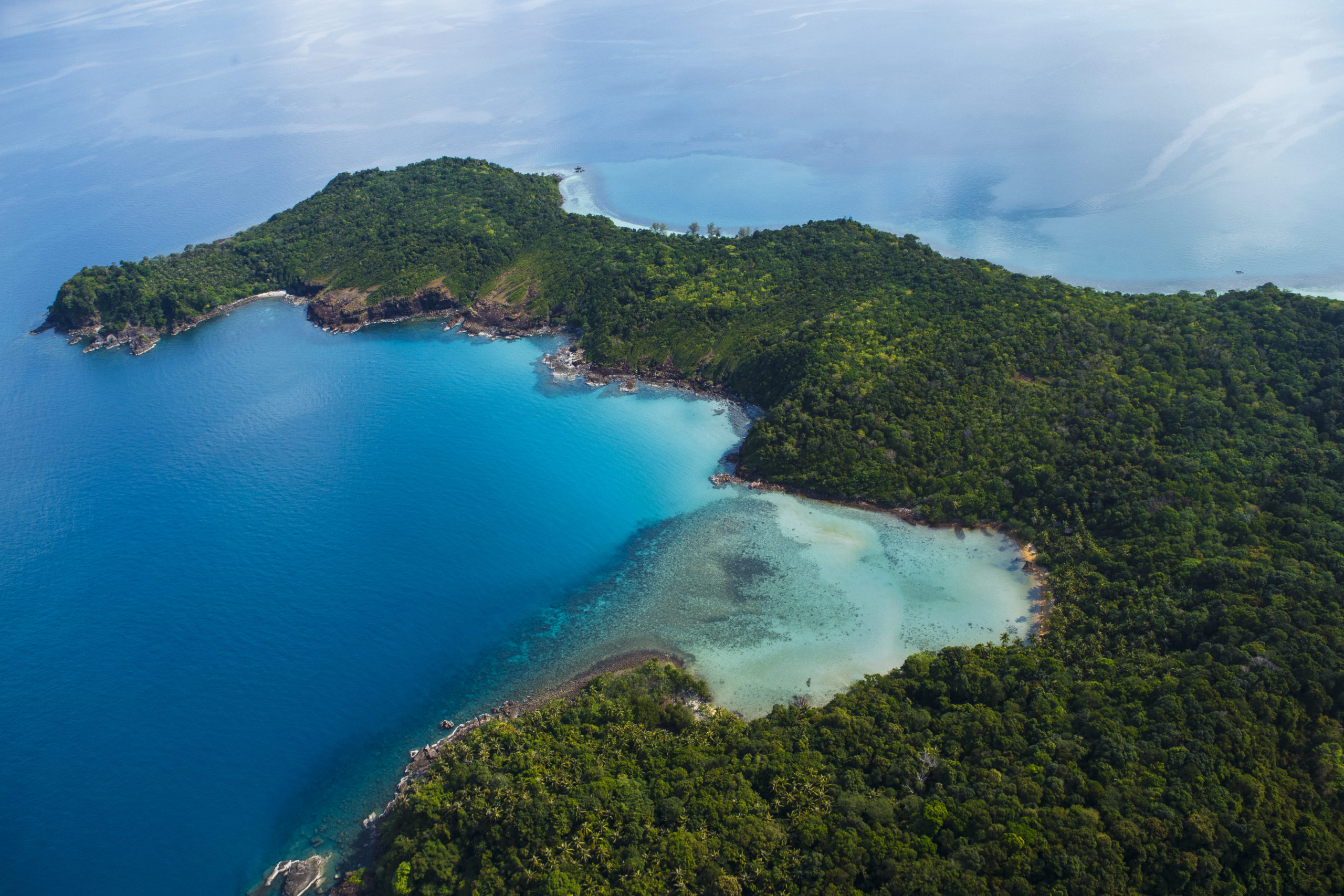 Koh Chang, Things to See and Do.

As is the case with other Thai islands, Koh Chang offers much more than idyllic beaches and warm blue waters to revel in. Nature lovers will enjoy the hikes, waterfalls, kayaking and snorkelling, while lessons at one of the island’s many Thai cooking schools will add flavour to your stay. The Shrine of Chao Por Koh Chang is believed to bring peace and good luck to the people on the island. Other interesting activities include firefly spotting in the mangrove plantations, a visit to one of the traditional fishing villages in the South and a guided tour of the island.

Scuba Diving – Koh Chang is increasingly popular as a scuba diving destination, mainly as a result of the dive friendly sites in the Koh Chang Marine Park, where a selection of dive schools operate. The diving runs all year round, but for best visibility and calm waters, between November and May is recommended. With no strong currents and reasonably shallow waters, Koh Chang suits beginners and divers doing refresher courses. The Marine Park has a variety of coral peaks and shallow reefs and there is even the wreck of a sunken Thai navy ship that has become home to a range of marine life.

Boat and Snorkelling Trips – There are 46 islands in the Koh Chang archipelago and boat trips to island-hop between them is one of the most popular activities for tourists. Most are offered as snorkelling trips, specifically by the boats departing Bangbao and Kai Bae beach on the west coast of the island. From here you’ll head into the Marine Park and towards the small islands for a day of swimming with the many reef fish.

Mountain Hikes – Hiking on Koh Chang has begun to draw the outdoor-loving crowds, with a few companies arranging treks across different parts of the island. It is not easy to hike independently on the island as there aren’t many marked out trails and a guide is recommended. The main routes are around the Klong Son Valley and Klong Prao beach, in the Kai Bae area. There is also the cross-island trail connecting the Klong Plu waterfall with Than Mayom waterfall, and if you’re feeling energetic, you can scale the two highest peaks, Salak Phet at 744m and Khao Jom Prasad at 630m.

Chasing Waterfalls – Koh Chang’s mountainous terrain means that 70% of the island is covered in rainforests which are home to many waterfalls. The most notable include the easily reachable Klong Plu waterfall, just a 15-minute walk through the jungle. Kai Bae, Than Mayom and Mayom must be mentioned, while the Klong Neung waterfall is the tallest on the island, although also the trickiest to get to.

Koh Chang Animal Project – If you’re an animal lover, consider visiting the Koh Chang Animal Project to learn about the inspiring work being done here. Set up as an animal medical care centre in 2002 to help abused, injured and abandoned domestic animals on the island, the main focus is to educate in how to provide pets with good health care. There is no official billing system at the project and as a non-profit it is supported by private donations only. Read more at http://www.kohchanganimalproject.org/

The beaches around Koh are of the island’s most appealing attraction, with popular White Sand Beach, Klong Prao, Kai Bae and Lonely Beach topping the list. However, if you’d prefer something a little quieter and more remote look to the west coast, to Bang Bao Bay on the south of the island and beyond. 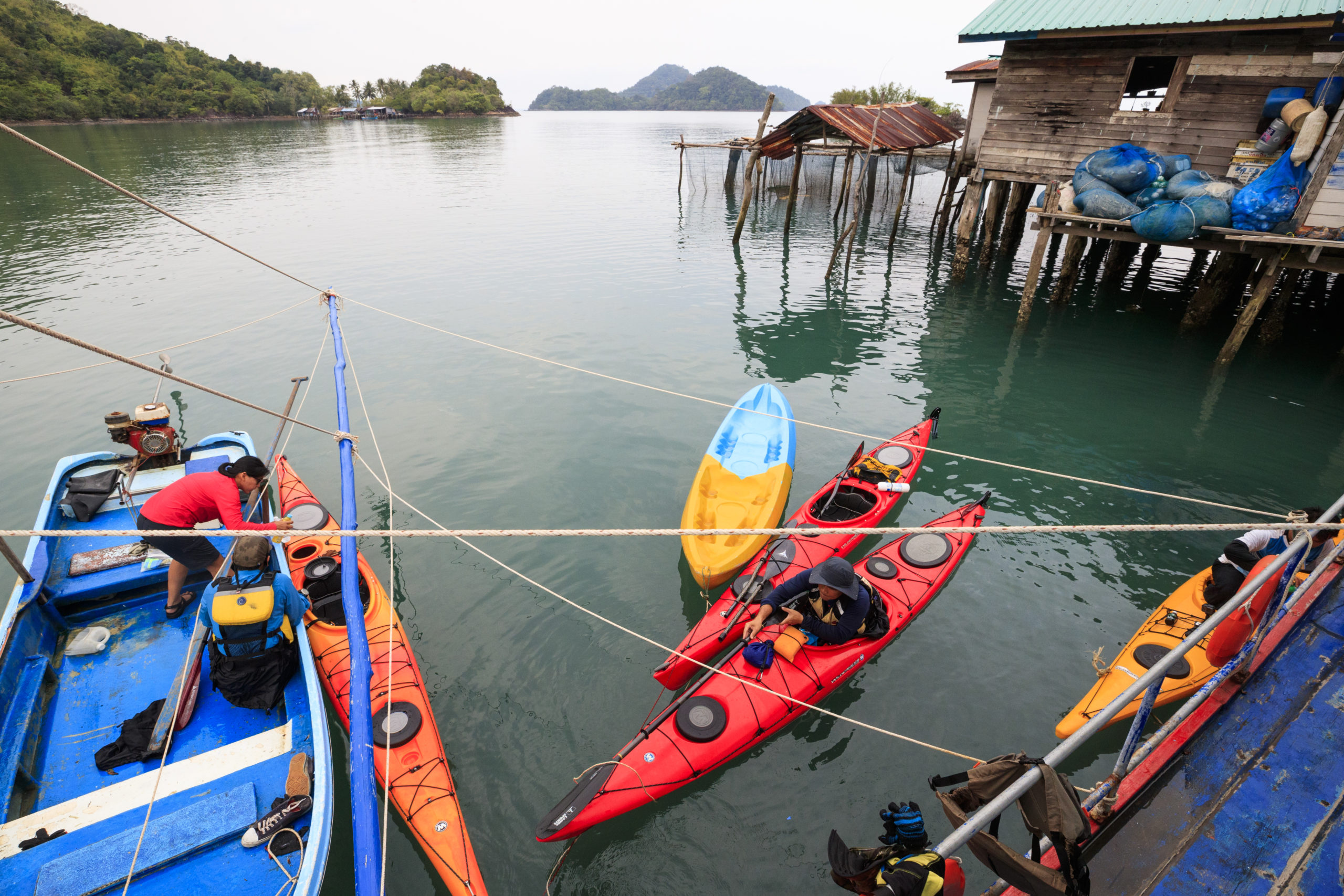 White Sand Beach – With a humble beginning as a small fishing village with basic bamboo huts for accommodation, White Sand Beach is now the main hub of tourism on Koh Chang with a healthy mix of activities and fun things to do, as well as numerous comfortable resorts to stay in. Boasting a 3 km stretch of soft white sand and a dense tree-covered mountainous backdrop, you will understand why the area has been extensively developed. Among the advantages of staying on Koh Chang’s most popular strip are the many restaurants, wide selection of bars and active nightlife.

Klong Prao Beach – Home to some of the most upmarket resorts on the island. The long expanse of fine white sand and clear waters, palm trees running along the beach edge and idyllic picturesque scenery make this the perfect location for couples and families wanting to escape for some quiet island living. The beach is divided into two by an estuary that runs through a coconut plantation out to sea. The Klong Prao village extends inland from the sea, but the name is used to cover the five kilometres of coastline from Chai Chet in the north to Kai Bae in the south.

Kai Bae – The village and beach are found just past the far southern section of Klong Prao and provide an inviting mix of nightlife, restaurants and beach activities. The beach, not as long or wide as Klong Prao or White Sand Beach, is known as one of Koh Chang’s most tropical and scenic settings. Overlooking the bay, this is where you should rent a kayak to paddle to one of the nearby islands and find your private beach.

Lonely Beach – Also known as Haad Tha Nam, Lonely Beach used to be cut off from the mainland and only reachable by a hike over a large hill. Well worth the effort, it was a place to get away from it all that only the adventurous traveller would seek out. Today, the beach huts have been upgraded and there is a road connecting Lonely Beach to the rest of the west coast. It remains popular with backpackers visiting Koh Chang and given that there is less infrastructure here compared to the beaches further up the coast, you still get the sense of seclusion.

Klong Kloi – Perhaps better known as Bangbao Beach, Klong Kloi lies on the south of the island about a kilometre from Bangbao fishing village. This area is increasingly popular and there is a wide range of accommodation from budget hostels to simple bungalows, as well as luxury hotels. Staying here does leave you a bit removed from the island hub, so do bear that in mind when booking. 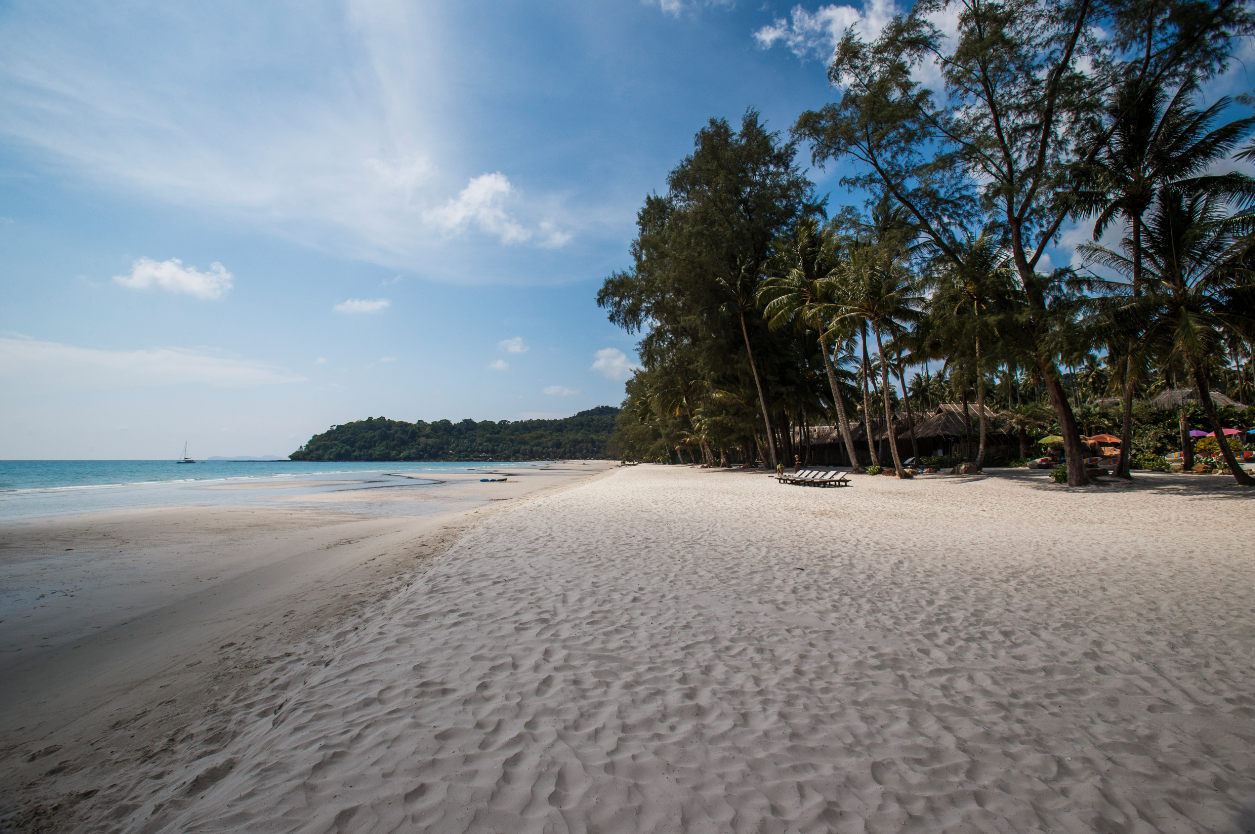 Koh Chang, Where to Stay

Most of the island’s accommodation is located on the western side of the island, where the better white sandy beaches are, making the eastern side of the island less crowded. Catering to a wide range of travellers from independent backpackers, honeymooners to family groups, you will find everything from budget-friendly chalets to five-star pool villas, whichever your preference – and budget. The most popular areas are around White Sand Beach and Lonely Beach, while Klong Prao and Kai Bae beaches are the best options for families and home to some of the island’s best resorts, such as Emerald Cove Resort. Tucked up in the hills are numerous health resorts that blend beach life with wellness and yoga retreats.

The mild season runs from November to the end of February. This is when the island is at its busiest, with guaranteed daily sunshine, blue skies and calm seas. If you don’t mind the crowds, this is the ideal time to visit and you can expect an average temperature of between 27-30C, with the occasional refreshing thunderstorm. The hot season follows and runs for 3 months, from March to April. During these months the temperature is higher, as is the humidity. That said, Koh Chang is a year-round destination and you can always dip into a pool or the ocean to cool off when the temperatures soar.

Koh Chang, Getting To and Around

Koh Chang is the largest island in the Koh Chang Archipelago, approximately 430 square kilometres in size with high mountains and steep rocky cliffs. With an airport located just 20 kilometres from the ferry terminal in Trat, Koh Chang is easily accessed by daily flights from Bangkok’s Suvarnabhumi Airport on Bangkok Airways. Alternately, look to taking a bus to the ferry terminal and transferring cross from there. On arrival, you can either make use of a private transfer or shared mini-bus to your chosen accommodation. Getting around the island is fairly easy. The main mode of transport is by songthaew, they also run from the ferry terminal with scheduled stops at all the beaches along the island’s West Coast. Another recommendation is to rent a motorbike, which can be done at a very reasonable price. 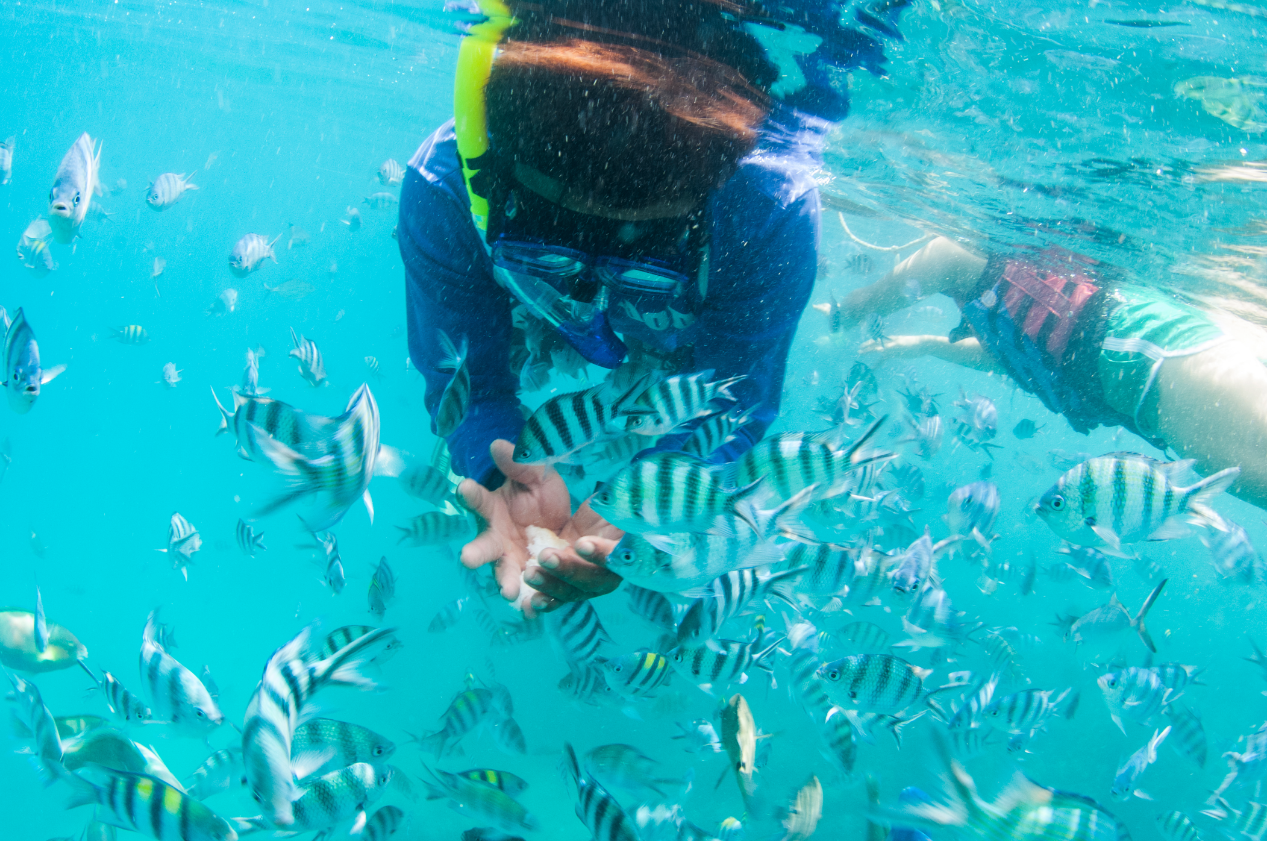