Chiang Mai is located on the banks of the Ping River in a lush green valley in Northern Thailand. Founded in 1296 as the capital of the ancient Lanna Kingdom, today it is a peaceful place where past and present merge with modern buildings and luxury hotels exist effortlessly alongside sacred temples. In the Old City remnants of walls and moats, as well as elaborate Buddhist temples, including the 14th-century Wat Phra Singh and 15th-century Wat Chedi Luang, can be seen. 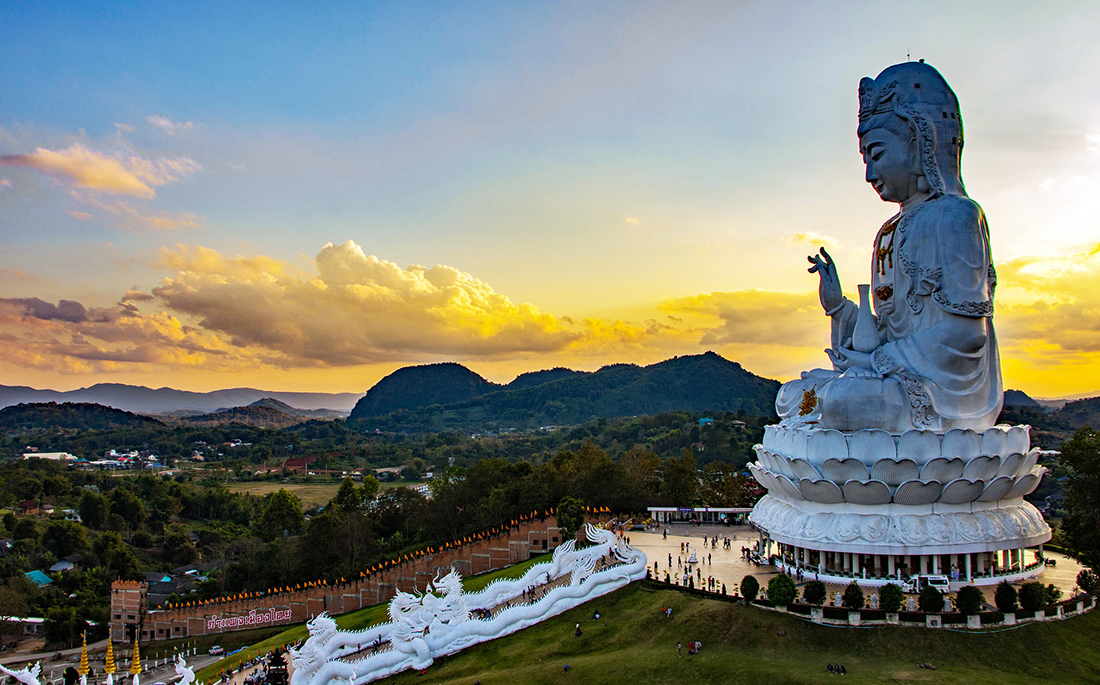 Today Chiang Mai is a peaceful place where past and present merge and modern buildings and luxury hotels exist effortlessly alongside sacred wats. Yet somehow it feels more like a rural town than a bustling capital. A place where the people are intrinsically linked to their timeless traditions and ancestors. Just beyond the city’s borders find lush countryside, pristine rainforests and peaceful country villages.

In the daytime, the high streets are full of interesting shops, quirky cafés, art galleries, hotels and restaurants, and as soon as the sun sets, the square on the outer ring of the moat fills with vendors. Chiang Mai is a buyer’s paradise, and the famous Chiang Mai Night Bazar on the east side of the old walled city is open every day of the year regardless of the weather and will appease any shopper.

Offering a quieter and more authentic look at the Kingdom of Thailand, Chiang Mai has developed a reputation as a spiritual retreat, a place to study meditation and yoga and where you can immerse yourself into Northern Thai culture. Whatever it is you hope to gain from your visit here, you’ll undoubtedly find. 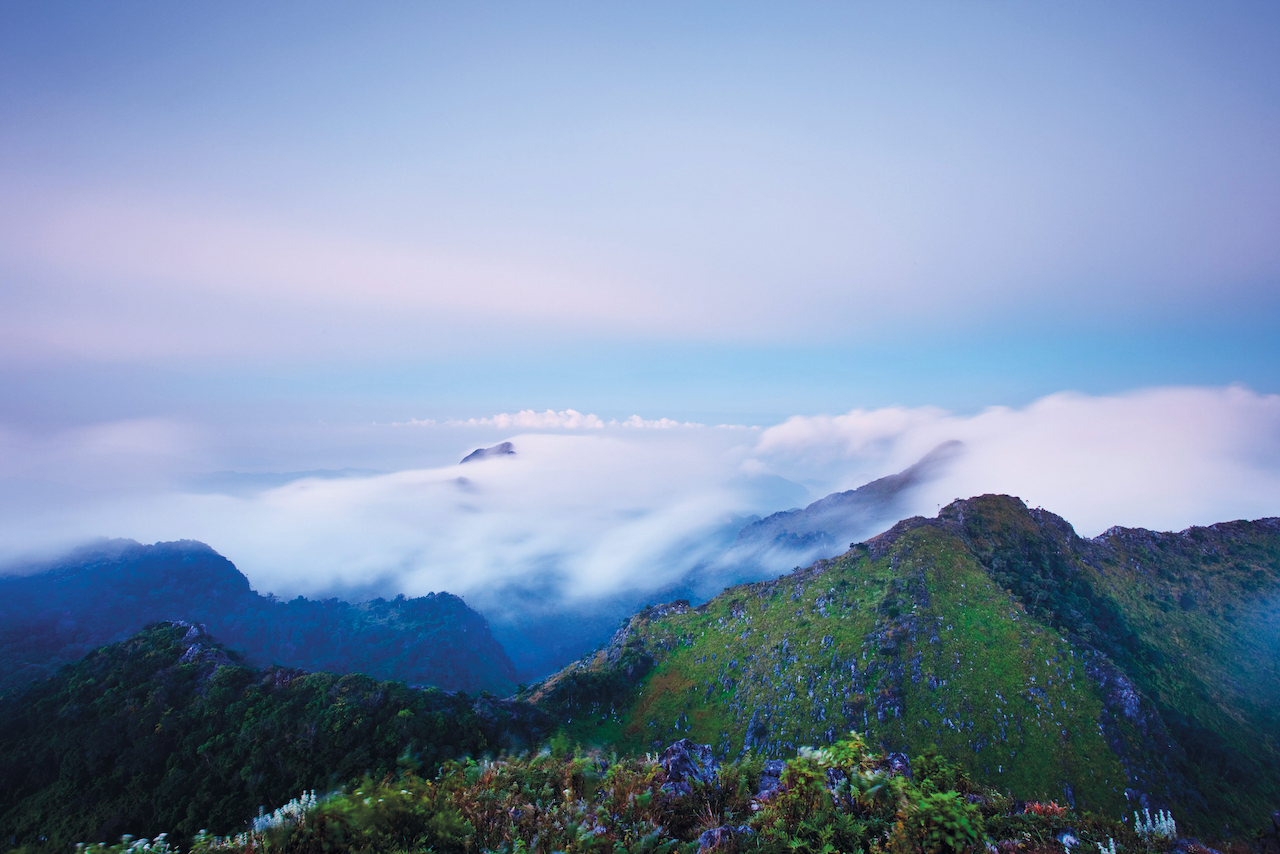 Doi Pui Hmong Tribal Village – Located on Doi Suthep Mountain about 4 kilometres from the impressive Wat Phrathat Doi Suthep, and home to the Hmong hill tribe, one of six major hill tribes found in Thailand. The villagers here wear Hmong clothing, sell Hmong handicrafts, and live in traditional Hmong-style homes. In the heart of the village is a small house that has been set up as a museum to display early hill tribe clothing, plantation tools, kitchen and opium-producing equipment. Further up the hill is an attractive garden with abundant flowers and trees, including the opium poppy which was once a mainstay of the economy of the hill tribe people. Over the years the Hmong Doi Pui Village has grown steadily and there are currently about 200 households here, with a population of over 1300 people. The village’s main income is tourism, and the residents are committed to educating visitors on Hmong culture and customs in a bid to preserve their traditions.

Bo Sang – A village in the San Kamphaeng district on the outskirts of Chiang Mai, Bo Sang is best known for its brightly coloured handmade umbrellas and parasols, with a festival held there each year. While not an ancient tradition, Bo Sang’s history of umbrella craftsmanship dates back over a hundred years and the paper is processed from mulberry bark. Legend has it that a wandering Thai monk brought the process back from Burma to Bo Sang, his hometown, teaching the locals the craft as something they could do once their fieldwork was complete. You’ll come across silk, silverware and gem factories at the Bo Sang Handicraft Centre, where the artisans make the world-famous Sa Paper umbrellas.

Mae Sa Waterfalls – Part of the Doi Suthep-Pui National Park and located about 26 kilometres from Chiang Mai is the Mae Sa Waterfalls. Tourists flock to the natural wonder to witness the impressive 10-level waterfall. The area is immense and is a popular leisure spot for unwinding in the lush and scenic greenery. Hiking to the Mae Sa waterfalls trail is a perfect day trip from Chiang Mai, and you can guide yourself. Bring a picnic lunch and your swimsuit and enjoy a day in nature, away from the business of the city

Doi Inthanon National Park – One of the most popular national parks in Thailand, famous for its hiking trails, waterfalls, remote villages and viewpoints. Known as ‘The Roof of Thailand’, Doi Inthanon forms part of the Himalayan mountain range with elevations between 800 and 2565 meters, including the highest peak at Doi Inthanon. Which is also the highest mountain in Thailand. The vegetation is predominantly evergreen cloud forests, pine and mixed deciduous teak. The park is approximately 60 kilometres from Chiang Mai and is one of the few in the country that is easily accessible by public transportation. Once in the park, the distances between the attractions are great, and you may want to focus on a specific area or keep your organised transport to take you from one attraction to the next.

Elephant Nature Park – Located 60 kilometres from Chiang Mai city, the Elephant Nature Park is a rescue and rehabilitation centre that aims to provide a home for dozens of distressed elephants from all over Thailand. It was established by Sangduen ‘Lek’ Chailert who was born in the remote mountain community of Baan Lao in 1962. An elephant lover, she decided to do something about the plight of elephants she’d come across in the logging and tourism industry. Lek opened the 250-acre Elephant Nature Park as a sanctuary where these previously abused and distressed elephants can roam freely. The park’s herd includes disabled, orphaned and blind elephants of all ages. Visit for a day, or consider volunteering here to help fund the work that they do. 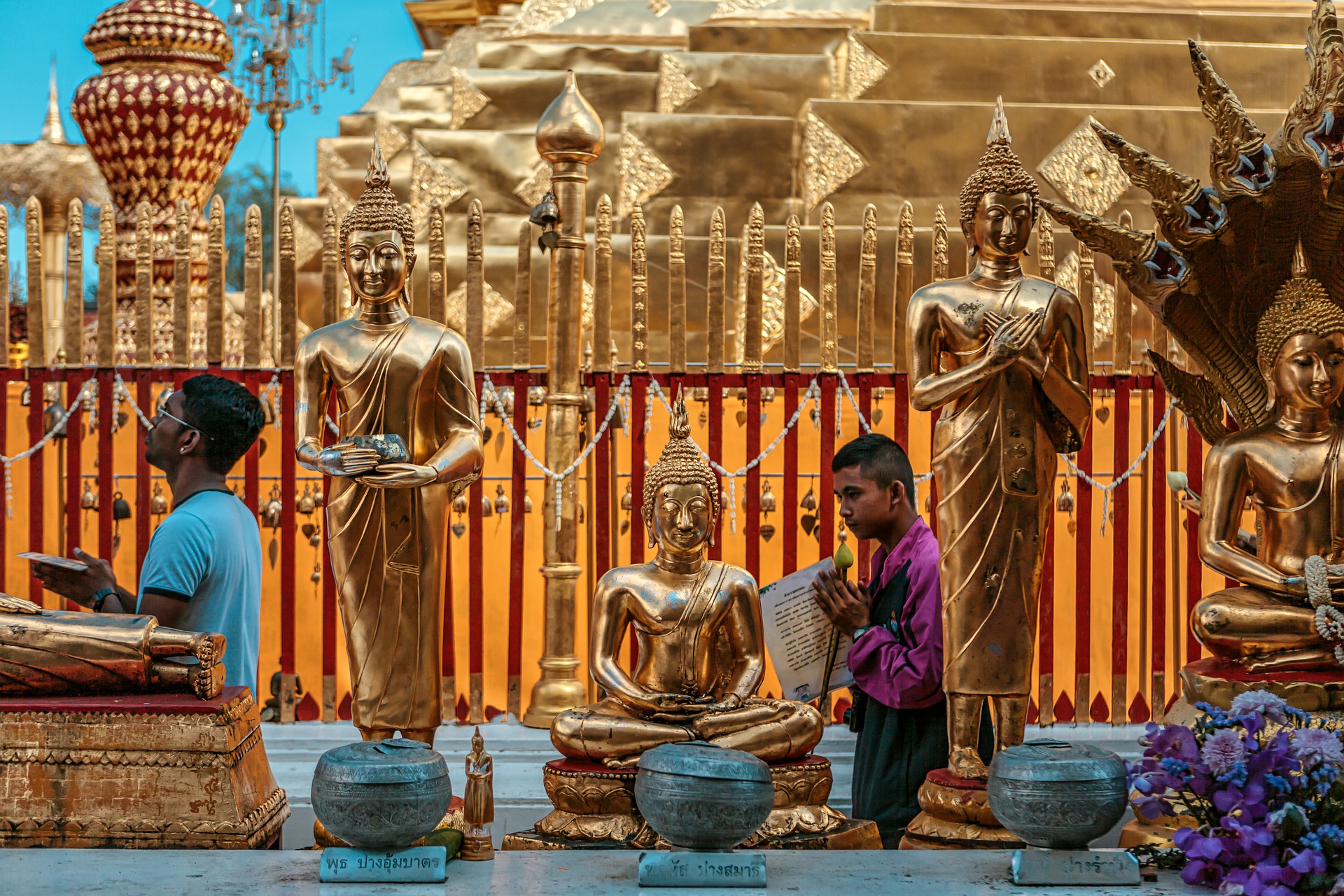 Chiang Mai, Where to Stay

The most popular area to stay in Chiang Mai is definitely the Old City and its immediate surroundings, especially overlooking the charming and walled Old City. All along the Ping River leading out of town are upmarket hotels and suites with lingering lawns and pathways, which do make for a perfect base too.

The most popular time to visit Chiang Mai is between October and April when the weather is mostly cool with a light breeze. The region has three distinct seasons: the cooler season from November to February, the hot season from March to June and the rainy season from July to October. Chiang Mai makes a good escape from the island and the capital’s heat, making it ideal for hiking in the surrounding mountains. Be aware that September is when Chiang Mai has most of its rain.

Chiang Mai, Getting To and Around

Numerous international and domestic airlines have direct flights to Chiang Mai International Airport. Travelling by train is also convenient, with a range of options from overnight sleeper trains to express trains, which depart from Bangkok’s Hua Lamphong Station around the clock. Once in Chiang Mai, you’ll want to walk, hop in a Tuk-Tuk or consider hiring a songthaew and driver to take you on your day trips. There are also many travel companies offering scheduled and private trips, should you prefer to simply sit back and enjoy without having to worry about planning the logistics.