Thailand’s Northernmost province, Chiang Rai is located in the dramatically mountainous landscape that borders Laos and Myanmar, formerly known as Burma. Founded by Phaya Mengrai in 1262 as part of the Lao–Thai Lanna kingdom, Chiang Rai didn’t become a Siamese territory until 1786, nor a province until 1910.

Lesser known than its sister city Chiang Mai, it has over the years gained popularity with tourists seeking a quiet and convenient base from which to explore the beautiful surrounding countryside, and offers a relaxed atmosphere, good-value accommodation and great local food, as well as a multitude of diverse attractions. With ecotourism as the main theme, you will find nature a major part of your travel experience here. 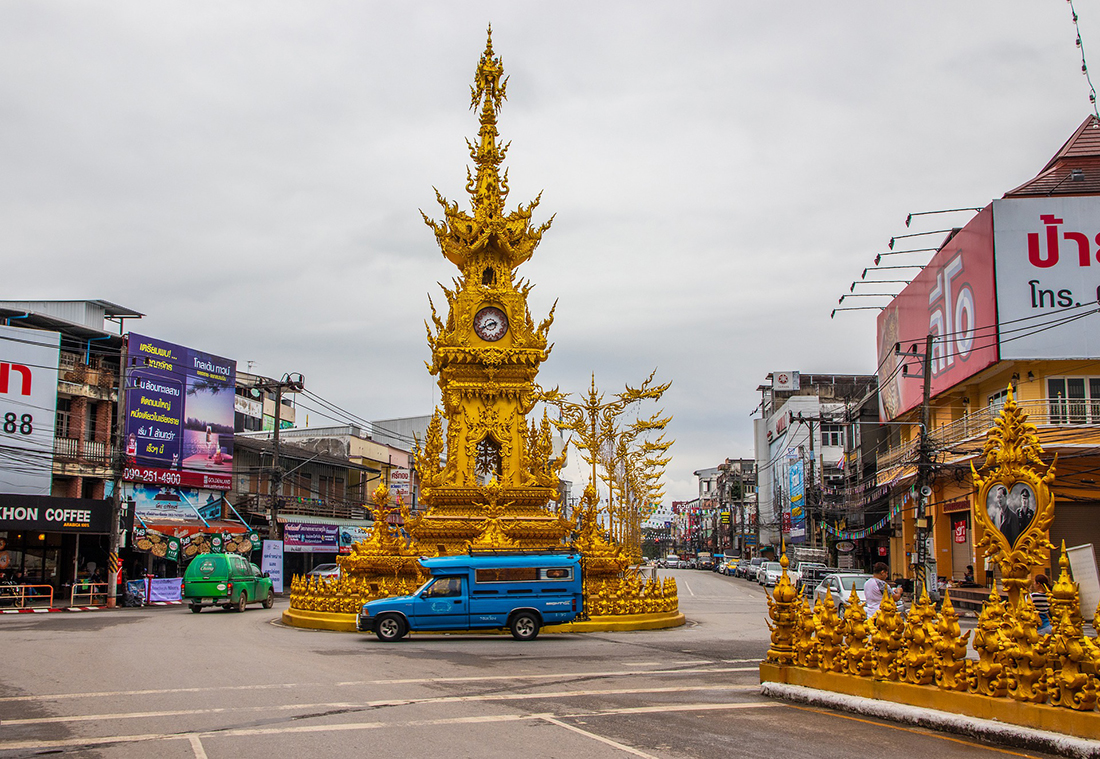 The Mae Fah Luang Art Museum and Culture Park houses one of Thailand’s largest collections of Lanna artefacts, with the landscaped grounds home to antique and contemporary art, Buddhist temples and other structures. The main attraction here is the region’s largest collection of folk art and teak artefacts from the Lanna Kingdom and a beautiful golden pavilion in the peaceful garden.

Arguably the most visited site in Chiang Rai, Wat Rong Khun or the White Temple draws countless tourists to its unusual yet iconic splendour. The famous temple is an eternal work in progress by designer and artist Chaloemchai Kositpipat, who has carved with painstaking detail the pure white ornate facade and path leading to the entrance. All statues and displays are symbolic of desire, greed, suffering and the heavenly deity. It may be a curious religious complex, but it is certainly one worth visiting.

In a similar vein, another of Chiang Rai’s more eccentric attractions is the highly unusual Baan Dam or Black House. The grounds contain a series of buildings, displays, sculptures and installations. Situated in the Ban Du district just north of town, it represents the long time work of local and nationally renowned artist Thawan Duchanee. This is not a religious site and is themed on human behaviour and interests and is certainly dark, not only in colour.

Wat Phra Kaew is an important temple in Thai history and one of the oldest in Chiang Rai. It is here that the Emerald Buddha was discovered in 1434 after lightning struck the chedi where it was being kept. The wat was subsequently built-in 1565 to house it and has been rebuilt several times since then; today it serves as home to a commissioned replica.

The Hilltribe Museum & Education Center is a good place to visit before taking a hilltribe trek. Run by the non-profit Population & Community Development Association (PDA), there are informative displays that offer insight into Thailand’s six major tribes and the issues that surround them today, including a look at their clothing, examples of bamboo usage, folk tools and other anthropological objects. 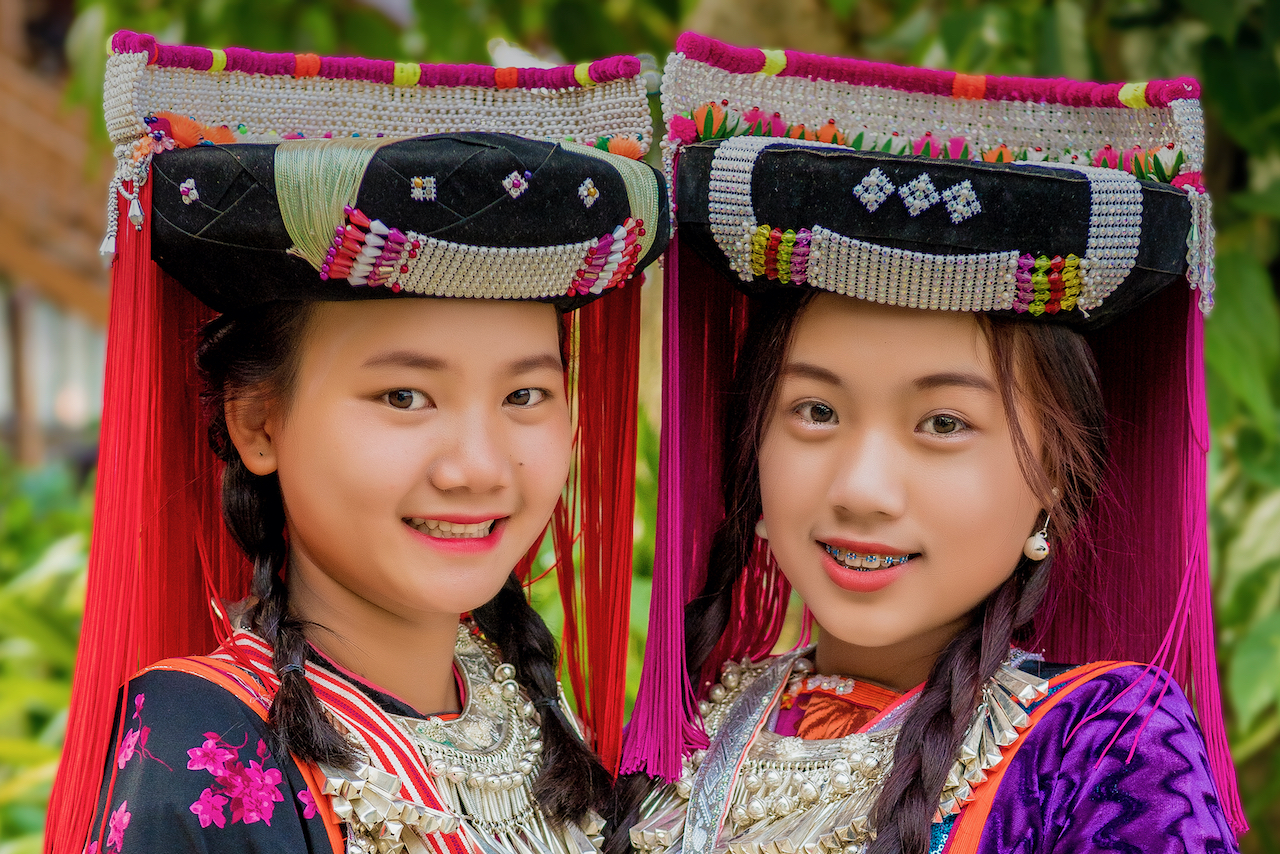 The Wat Phra Singh temple dates back to the late 14th century and is the oldest surviving original building from wooden structures with low, sweeping roofs in this typical northern Thai–style. The temple has impressive wooden doors thought to have been carved by local artists, impressive Naga that greet you at the bottom of the stairs and a copy of Chiang Mai’s sacred Phra Singh Buddha.

A major landmark in the city centre is the golden clock tower that serves as a traffic circle. Designed by the same artist who created the city’s famous White temple, Chaloemchai Kositpipat. The tower is the location of light and sound show each evening. Just five minutes’ walk away is the outdoor Night Bazaar where every evening from sunset to midnight you’ll find Thai souvenirs and clothing, jewellery, hill tribe crafts, t-shirts, dresses and silk scarves on sale. Then of course there’s the food section; where you can select whatever your heart desires from the wide selection and sit down to enjoy it.

Phu Chi Pha is a national forest park at the eastern edge of Thoeng District in Chiang Rai Province. The cliff rises near the border with Laos and slopes down towards the Mekong River. The highest point of the ridge at 1628m offers excellent views of the surrounding mountains. This is one of the most famous natural tourist attractions of the Thai highlands and draws many hikers and walkers.

Take in the views of the city through the eyes of Thailand’s biggest Guan Yin, Buddhist Goddess of Deity, a statue that is found on the outskirts of the city. You won’t be able to miss it. Found at the Huai Pla Kung Temple it is a popular pilgrimage site for local Buddhists. Take a lift up 25 stories to take in the surroundings, literally from the eyes of Guan Yin. 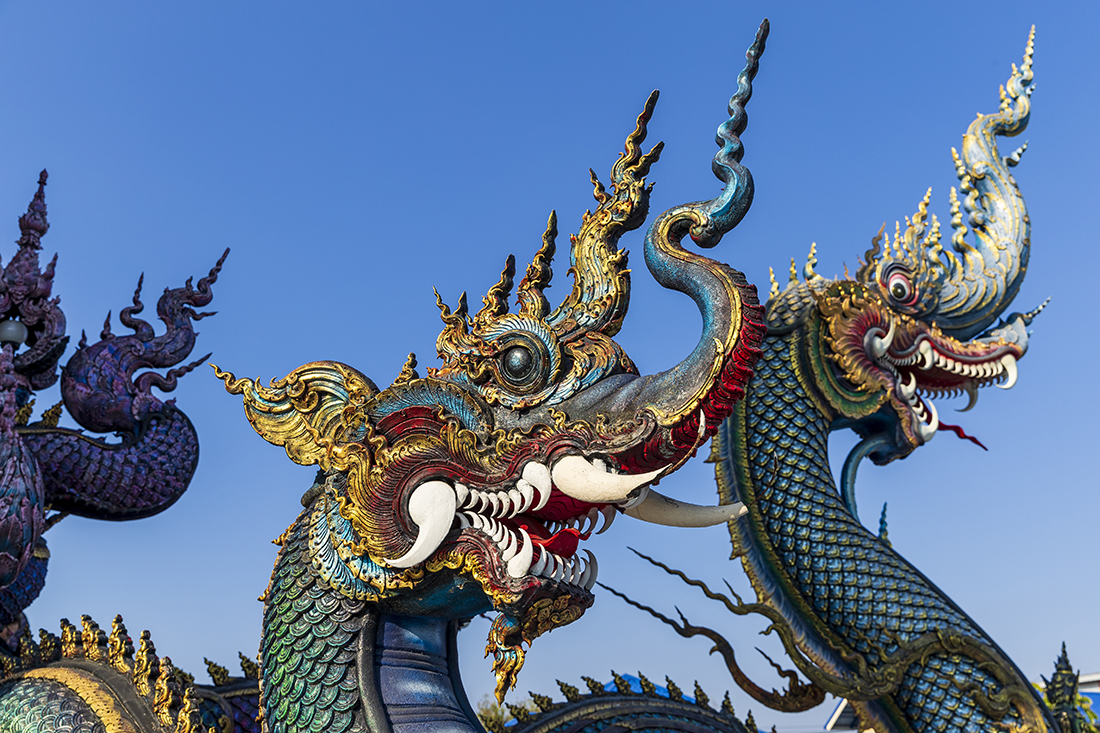 Visit the Doi Tung Royal Villa that was the former residence of the late Princess Mother, the mother of two Thai kings. While living in Chiang Rai she dedicated her life to transforming the area from a province struggling drug cartels to the thriving city it is today, making her much loved and respected by the people of Thailand. Take a self-guided tour around the Swiss-inspired villa to find out more about her Royal Project.

To fully appreciate the beauty of the Mae Kok River, consider hiring a long-tail boat and taking in the scenery along the two riverbanks. The river originates in Myanmar, flowing eastwards before crossing into Thailand and the Chiang Rai Province. The wide, shallow, and slow-moving river becomes a lake a few kilometres outside Chiang Rai. Pause at the riverside beaches, or go white water rafting upstream, whichever is your preference.

Familiarise yourself with the Golden Triangle, which in the past was one of Asia’s largest opium-producing regions, is now known as the tri-junction of Thailand, Myanmar, and Laos, whose borders meet in the Mekong River. The other two countries are visible from Thailand’s shoreline, or you could take a boat trip for a closer look.

Chiang Rai, Where to Stay

When looking at accommodation options, you may consider basing yourself within Chiang Rai. The city centre itself is relatively small and compact with anywhere near the Clock Tower, the Night Bazaar and Sanarmbin Road a convenient base for easy access to shops and restaurants.

Chiang Rai has a tropical climate and the most popular time to visit is during the slightly cooler months of December and January, which tend to be drier. The long rainy season lasts from May to October.

Chiang Rai, Getting To and Around

Fly into the Mae Fah Luang-Chiang Rai International Airport, which is serviced by numerous domestic and international airlines, or take the 3-hour drive from Chiang Mai either by bus or private transfer to Chiang Rai. You can choose between a taxi, guided tour and tuk-tuk to get around once you’ve arrived, even for a day trip to the surrounding attractions. Cycling is one of the best ways to appreciate Chiang Rai’s rustic backdrop and idyllic pace of life, as is hiring a motorbike.