Skip to content
Previous Next
10 Famous Foods of Bangkok

10 Famous Foods of Bangkok You Really Must Try.

No flavour is forgotten in the making of Thai food with spicy, sweet, salty and sour undertones guaranteed to make an appearance.

Recognised as one of the major foodie destinations in the world, Bangkok has countless street vendors and many impressive award-winning restaurants from which to choose, eight of them Michelin-Starred. Meaning that the city’s vibrant culinary scene never fails to impress. It is said that you could work your way through the city’s informal food stalls and restaurants, and never eat the same dish twice.

By far Thailand’s largest city, the capital can credit this to the melting pot of cultures and diversity that has inspired the city’s distinct character. Generally speaking, the people of Bangkok are fond of sweet flavours, and many of their dishes include freshwater fish, pork, coconut milk and palm sugar – common ingredients in the central Thai area. Easy access to the sea means an abundance of seafood is on offer.

Bangkok’s markets are like no others in the world, and a good place to sample local fare. Be it the famous floating and weekend markets of Bangkok, or the charming night markets that appear from nowhere across the city each evening. Transformational, Thai food is so tantalising that many visitors go on to cook Thai inspired dishes for friends once they return home. It is therefore highly recommended that you do a Thai cooking class whilst in Bangkok. 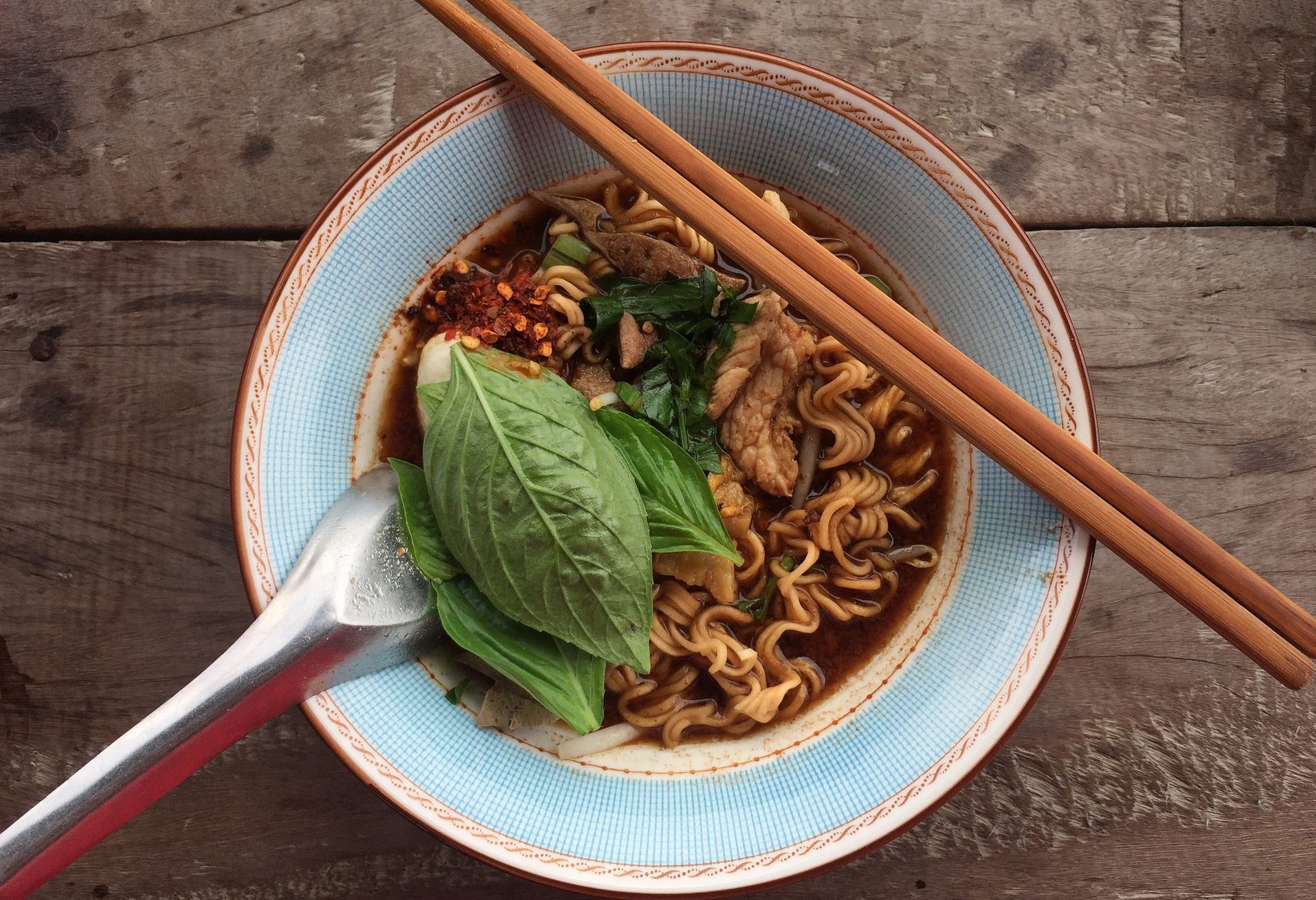 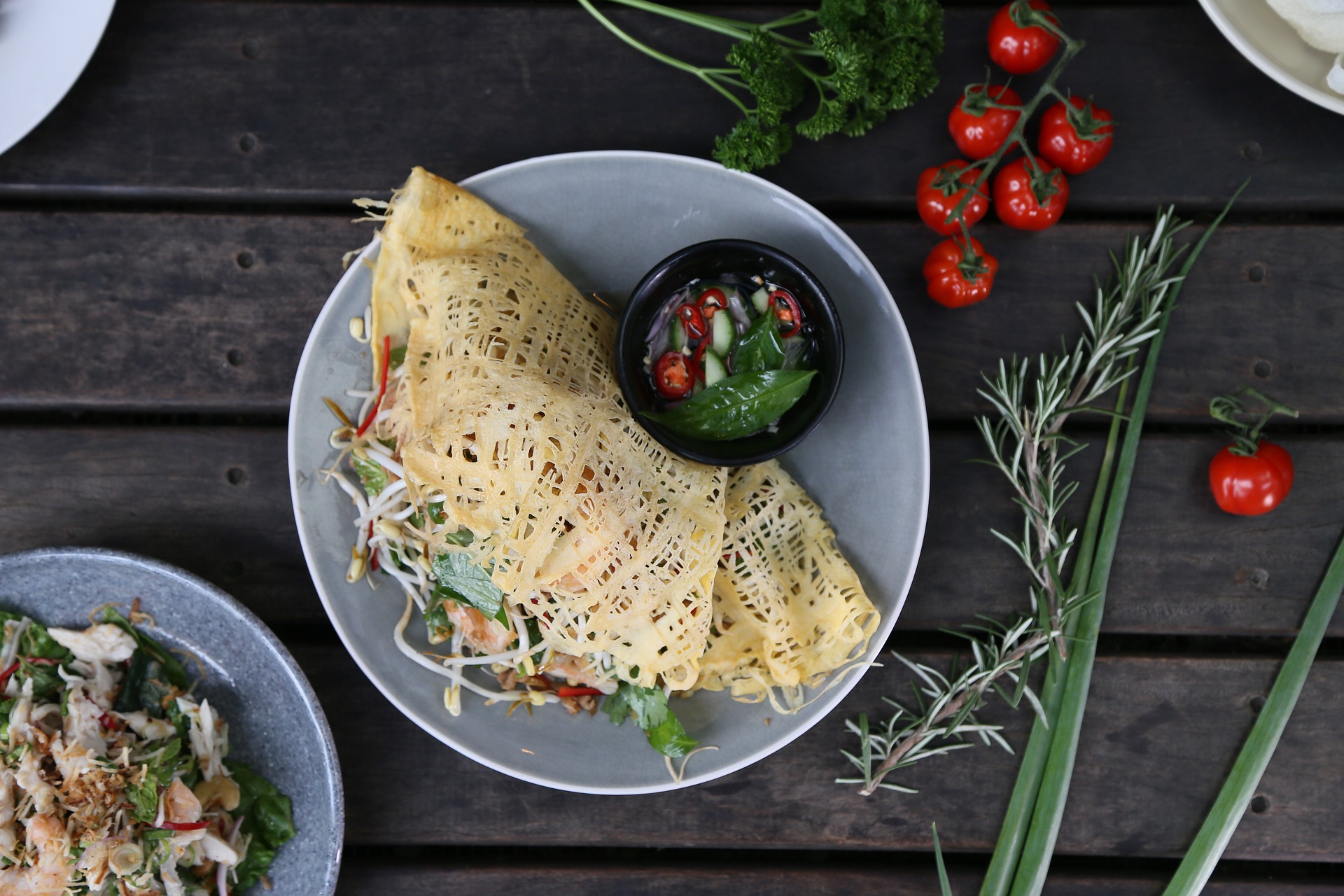 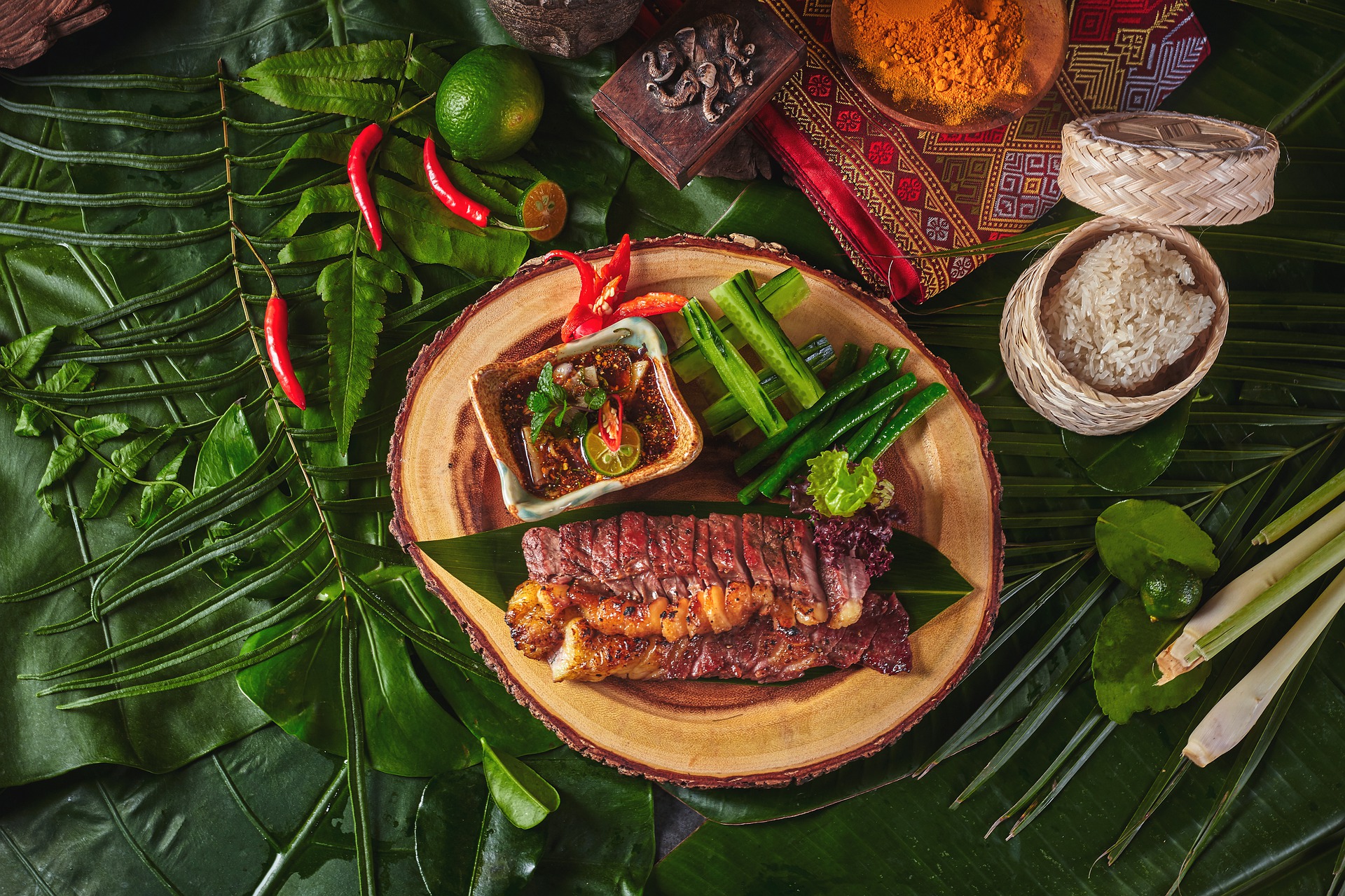 Thai cuisine was greatly influenced over the centuries by immigrants from southern China who likely first introduced the wok and a variety of noodle dishes to Bangkok and the rest of the country. Similarly, Muslims from Malaysia and Indonesia are thought to have first visited Thailand in the late 14th century, bringing with them a dried-spice and meat-based style of cooking that would make its way to Bangkok. With the royal court adopting a sophisticated and refined take on staple Thai dishes for almost 300 years, as well as influences from the country’s rural area that were brought to the capital, it’s understandable that for a relatively small country, Thailand’s cuisine is astoundingly distinct, delicious and interesting.

Here is a guide to 10 Famous Foods of Bangkok you really must try.

Thailand’s most famous dish and a Bangkok street food essential, Pad Thai is a stir-fried rice noodle dish commonly made with shrimp, chicken, beef or tofu, peanuts, a scrambled egg and bean sprouts, among other vegetables. It is traditionally served with lime halves and a few Chinese chives and a sliced banana flower. Cooking Pad Thai is no easy task as each ingredient must be meticulously added, the dish prepared and served immediately to ensure it is hot and flavoursome. Thip Samai, decades-old and usually packed is undoubtedly Bangkok’s most celebrated destination for this dish. 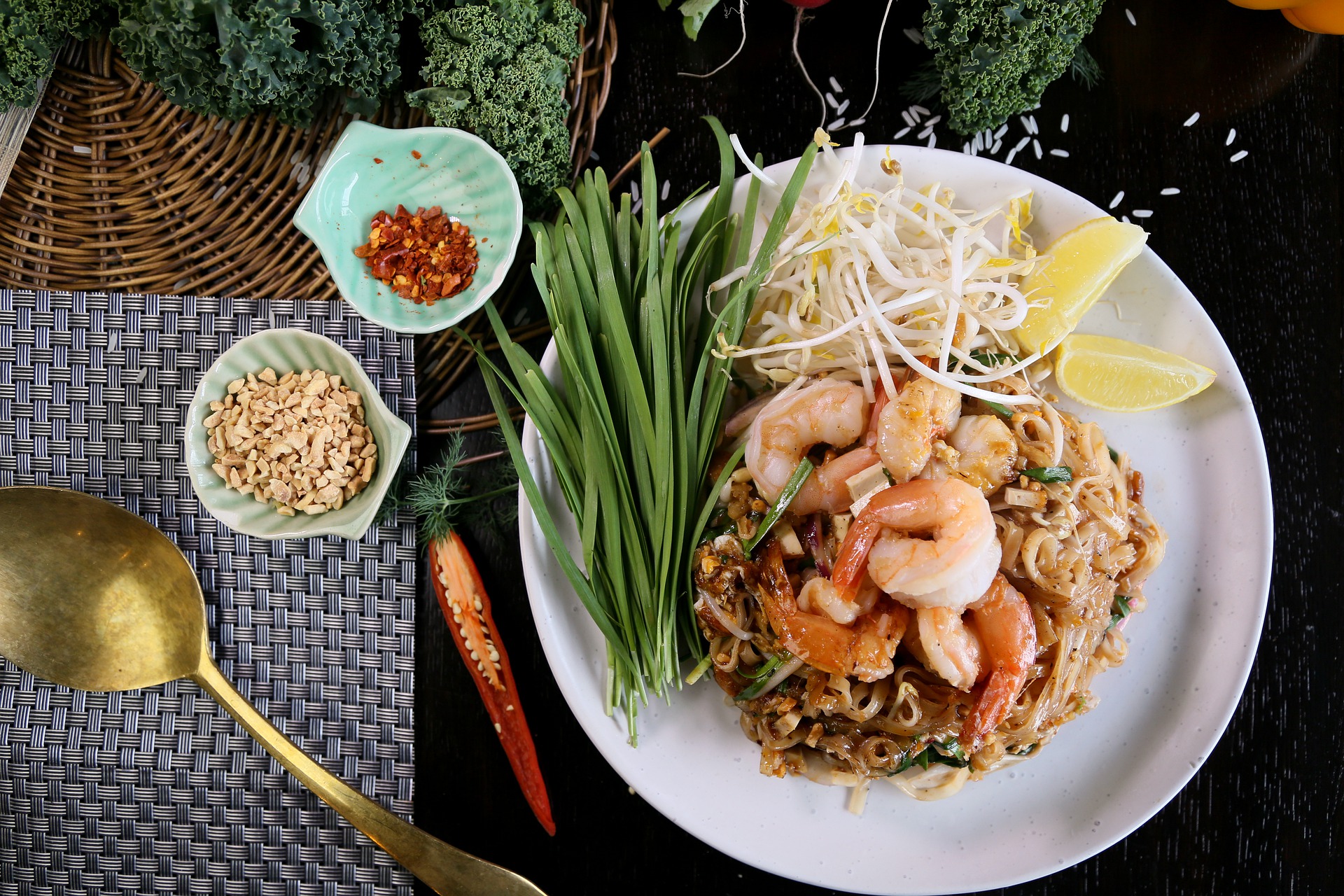 Fragrant lemongrass, lime leaf and lime juice give Tom Yam – a Thai sour soup, its characteristic tang, with fresh chillies providing its legendary sting. Tom Yam is available just about everywhere in Bangkok, but it’s hard to beat the one at Krua Apsorn, a legendary shophouse restaurant in the city’s Phra Nakhon district. A versatile dish that complements any meal, the refreshing blend of galangal, lime leaves, lemongrass, shallots, lime juice and fish sauce shapes this classic soup, fresh prawns and straw mushrooms often added to give it more body. The distinctive smell will always remind you of Thailand.

Don’t visit Bangkok without stopping for some Kao Niew Mamuang or Mango with Sticky Rice. Sweet tooth or not, you’ll be unable to resist this dessert dish found that’s on offer on almost every street in the city. Coconut milk is slowly cooked with sugar and salt before being poured over freshly made sticky rice. After the milk settles, cold ripe mango is peeled, sliced, and added to the warm platter. Available as a takeaway, you’re likely to find a preferred local and frequent it, a lot. 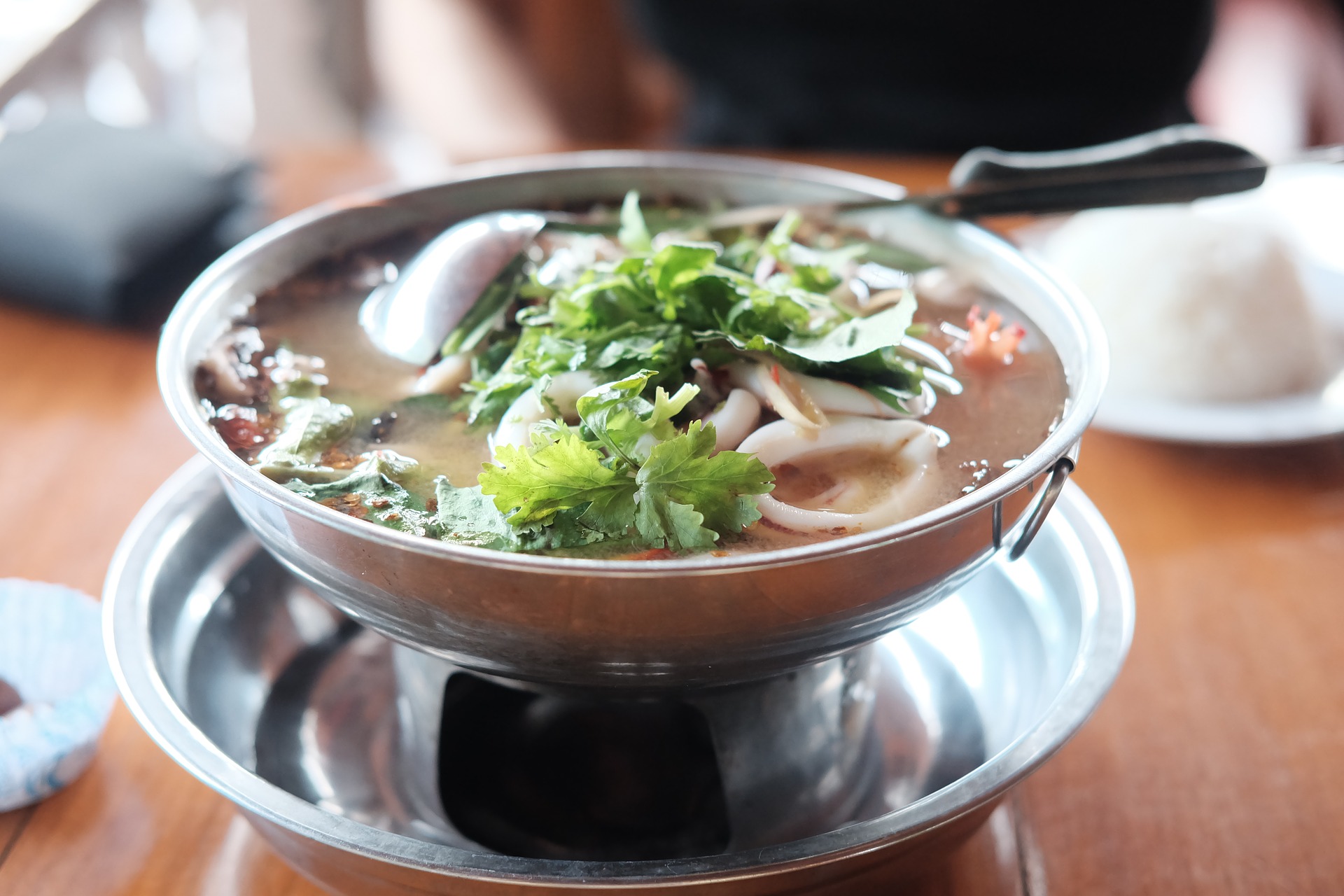 For the Som Tum salad, thin, crunchy strips of papaya are bruised with a mortar and pestle along with tomatoes, long beans, garlic, chillies, lime, fish sauce and tamarind juice for the making of this mouth-watering salad. Som Tum has its origins in Thailand’s rural northeast and when migrant labourers brought it to Bangkok, it became popular among Thais who love the spicy hit it provides. One of the most unique dishes in Thailand, it is a perfect light refreshing meal, especially at lunch time.

While Thailand has its fair share of curries, none quite rival the delicious Massaman curry. Usually containing coconut milk, roasted peanuts, tender potatoes, onions, bay leaves, cardamom pods, cinnamon, palm sugar, fish and tamarind sauce that is cooked to perfection, the sauce thickening with flavour before being poured over rice. It is often made with chicken or beef. This dish might sound ordinary, but it is by far one of the most delicious Thai dishes to be found in Bangkok. Top off the meal with a fried egg and basil for the perfect merging of texture and flavour.

Gooay Teeo Reua translates as ‘boat noodles’, with the name derived from the small bowls previously used to serve boats along the canals and rivers of Bangkok and central Thailand. Based on a dark, slow-cooked broth that includes meat, herbs and dried spices, these pork or beef-based bowls are among the most full-flavoured Thai noodle dishes. For a true traditional version of the dish, head to the cosy family-run Bharani restaurant, which has been serving it since 1949.

Any lover of noodles should know this wide rice noodle dish that’s fried with little more than egg, chicken, preserved squid and garlic oil to create a dish mostly only found in Bangkok, and one that’s at its best in Bangkok’s Chinatown. There are many restaurants and food vendors Gooay Teeo Kooa Gai on the menu, but Ann Guay Tiew Kua Gai seems to hold the reputation for serving up the best. 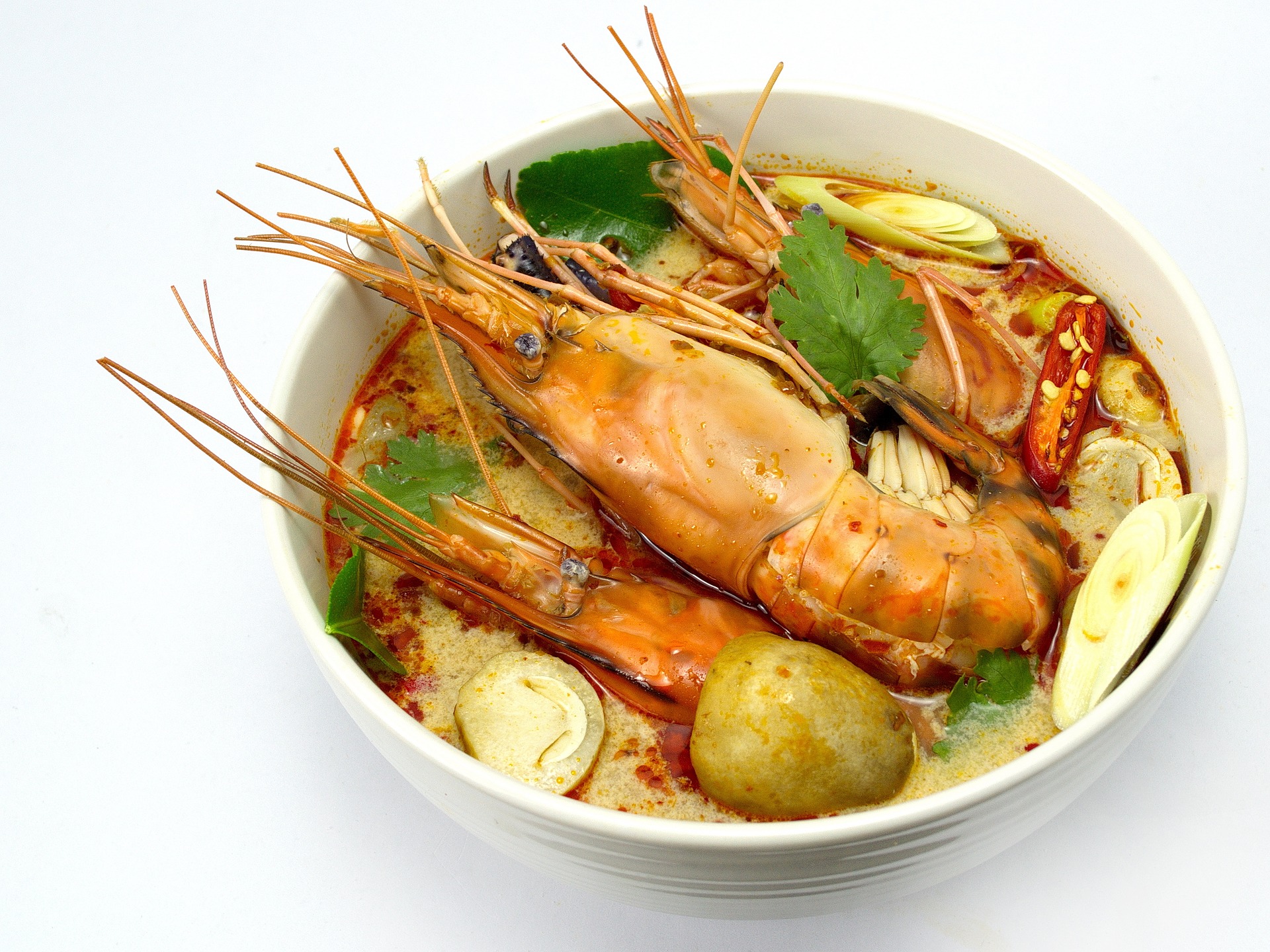 Combining lemongrass, galangal ginger, lime leaves, mushrooms, chillies, and tomatoes in one flavourful soup, Tom Yum Goong is a Hot And Sour Prawn Soup not to be missed. Goong means shrimp, but you can enjoy this savoury soup with chicken or opt to make the meal vegetarian instead. This dish can be found in Thai restaurants around the world, but is at its best in Bangkok.

Tom Kha Gai or Chicken Coconut Soup is a spicy and sour hot soup that is cooked in creamy coconut milk. It is light yet creamy, sweet yet tart, and layered with flavour. Made with coconut milk, lemongrass, ginger or galangal, garlic, chillies, lime juice, fish sauce – with either chicken, or mushrooms or both – it is likely to become one of your favourite go to dishes.

A staple in Southeast Asia’s Muslim countries and probably brought to Thailand via Malaysia or Indonesia, saté grilled skewers of meat are today often served with a slightly sweet peanut-based dipping sauce that accompanies them. Sate is widely available street side in Bangkok’s Chinatown, and is a convenient, nourishing and very tasty on the go option. 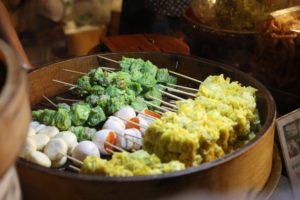 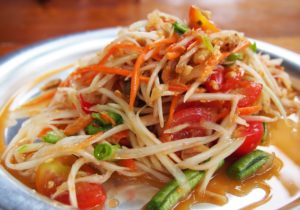 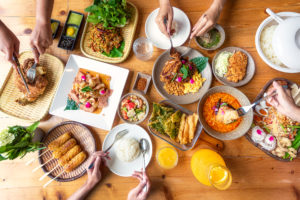