It is true that if you ask any one who’s been lucky enough to visit Thailand to name their favourite thing about the much-loved Kingdom, that a long, diverse and wondrous list will be compiled. Yet like with any country, there are iconic attractions and activities that are synonymous with the destination.

That in mind we’ve compiled a list of things to tempt you our way and show you why Thailand is such a popular tourist spot in South East Asia.

1. The Grand Palace and Wat Prakeaw in Bangkok 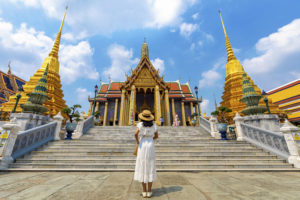 An absolute must see and city landmark in Bangkok is the spectacular Grand Palace that was built in 1782 and for 150 years was the home of the Thai King, the Royal court and the administrative seat of government. Today the Grand Palace continues to amaze visitors with its beautiful architecture and intricate detail and is a proud symbol of Thai craftsmanship and remains the spiritual heart of the Thai Kingdom. It is important that visitors dress modestly when visiting the Grand Palace or entry can be refused. Do keep an eye out for the late King Bhumibol Adulyadej’s burial ceremony which will take place in September 2017 in front of the Palace.

There are several floating markets in Thailand but this one is the biggest and most popular, providing a wonderful photo opportunity whilst giving insight in a bygone way of life. An early morning start is recommended to avoid the heat and catch the market at its liveliest. The floating boats are piled high with tropical fruit and vegetables, ready-to-drink coconut juice and local food cooked onboard. It is recommended that you enjoy a visit on a guided boat and have cash for easy transactions. The market is situated about 100km outside of Bangkok and it is well worth the traveling time.

Head beyond the obvious for a trek into Northern Thailand to meet the traditional hill tribes who have been living off the land in this rugged forest region for thousands of years. Here each village has a different language, belief system, style of dress and tradition. One of the most well known hill tribes are the Karen “Long Neck” whose women wear weighted rings around their necks to give them the elongated look. There are rice fields and lush valleys far from the crowds, lessons in traditional medicine from a village shaman and the deep cave of Tham Lod to explore.

The staggeringly beautiful islands that shot to fame with the filming of the Leonardo DiCaprio classic ‘The Beach’ as well as after appearing in James Bond, Koh Phi Phi is situated in the province of Krabi and is a must visit on any 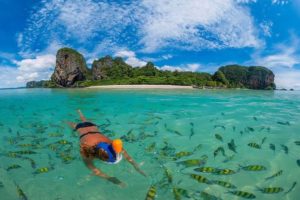 trip to Thailand. The island has no roads so you will have to do a fair amount of walking, but with everything happening between the two main beaches you will never be far from the hive of activity. From here day trips to popular spots and for snorkeling and scuba diving are easily arranged.

On the must do list is a visit to Maia Bay of The Beach fame, to soak up the postcard perfect beauty of the setting. Also the untouched bay of Monkey Beach which is a short kayak away and an ideal place to spend an afternoon surrounded by the primeval monkeys that come down from the dense jungle to play on the beach. Bamboo island national park should not be overlooked, a remote and peaceful tropical dream measuring 600m wide and 700m long, you can lose yourself on the white sands of this paradise.

Thailand is home to over 31 000 temples, yet some are more striking than others. Wat Phra That Doi Suthep in Chiang Mai is one not to be missed. Located on the top of Doi Suthep at the end of a 15km drive up a winding mountain road, the temple is simply referred to as Doi Suthep by most people. To reach the temple you climb a 309-step staircase with banisters bejeweled with mystical serpents. At the base, all five of them rear their heads with the green and gold scales of their body continuing up the stairs. The architecture, statues, murals and shrines seen here are nothing short of breathtaking and on reaching the top you are greeted with the site of a golden spire, the walls around the spire are mini enclaves decorated with historical murals. Outside the central enclave area you will find the shrine to the White Elephant and the story of how the temple was founded. Built as a Buddhist monastery in 1383, it is still a working monastery today and will astound you with the detail and magnificence.

Thailand is home to many waterfalls but the one at Erawan National Park impresses most. Situated within the Ewaran National Park the Ewaran Falls are a group of seven waterfalls with the drop from the top waterfall to the bottom one over 1500m, each with its own distinctive character. The water plunges over lime stone cliffs and into beautiful plunge pools, this has led to the landscape being sculpted by the water and it is truly beautiful. You can spend a whole day in the park trekking from one waterfall to the next, stopping to take a swim in the pools where the water gathers to cool yourself down. To view the cascading and pooling water from above you will need to take a 2km hike, but the view is more than worth it.

West of Khao Lak, this group of rocks and islands lies 90 minutes by speedboat off the coast of Phang-Nga, or eight or more hours by slow boat from Phuket. The area was declared a Marine National Park in 1982 and as a result remains largely undeveloped. Derived from the Malay term sembilan, meaning nine, Similan refers to the nine main islands in the group. The waters surrounding the Similans is full of tropical fish and beautiful coral, and offers exceptional underwater visibility, making the diving here the best in the region, and of the best in the world.

A UNESCO World Heritage Site, the Khao Yai National Park is Thailand’s second largest and one of the most visited national parks spreads across four provinces covers. Covering more than 2000 square kilometers of forest and grassland there are more than 50 km of hiking and biking trails winding through the established reserve. The park also shelters diverse wildlife with 67 species of mammals such as bears, gibbons and elephants as well as over 320 species of birds.

9. Take a Trip To The City of Ayutthaya

Well worth dedicating at least a day to, the UNESCO World Heritage Site Ayutthaya needs to be on your Thailand to-do list. Originally the capital of Thailand the city, it was founded in 1350 when King U Thong relocated to the city to escape an outbreak of smallpox. However in 1767 the Burmese army marched on the city and destroyed nearly every part of it. The ruins of the old city now form the Ayutthaya Historical Park, an archaeological site that contains palaces, Buddhist temples, monasteries and statues.

Thailand is home to many different kinds of street food and every street in every city will have a variety of stalls selling their wares. From Pad Thai to Som Tam and grilled meats, all available at any time of the day and you will see vendors resting in between the orders that stream in around the clock. Thai’s rarely cook at home as the cost of eating out is so low compared to cooking at home, when looking for a food stall to eat at a good choice is to follow the locals to see where they are eating.

Its true what they say, Thailand is one of the best shopping destinations and you will find a variety of stores and local markets throughout the country that specialise in local craft, wooden carvings, silverware and jewelry, silk and fabrics, pottery and even furniture. The night markets are a must with their mix of tradition and new world rubbing shoulders on the same stands, as well as interesting cuisine to taste. But championing the enthusiastic shopper’s heart is the Chatuchak Weekend Market, the largest open-air market in South East Asia. Once only popular among wholesalers and traders, Chatuchak has reached a landmark status as a must-visit place for tourists. Its sheer size and diverse collections of merchandise will bring any seasoned shopper to their knees with the 35-acre area home to more than 8000 market stalls, it is known to draw more than 200000 visitors on an average weekend. Experienced shoppers would agree that just about everything is on sale here and you’d do well to bargain somewhat for the best prices. 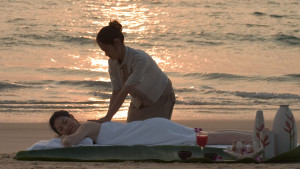 All this exploring and travel can be hard work, and you should not miss booking a Thai massage. Famous around the world, the style of massage is unique as it stretches your body whilst working on the body’s pressure points.The whole experience will leave you feeling invigorated and balanced. Every small town and city is guaranteed to have many massage parlors and the prices are very affordable compared to what you would pay back home.

Thailand certainly has something for everyone and it is no surprise that there remains a constant increase in South African holidaymakers to Thailand. Often referred to as the ‘land of smiles’, we have no doubt that the above attractions, emerald waters, delicious food and ancient temples will make you do just that, smile – from the heart.